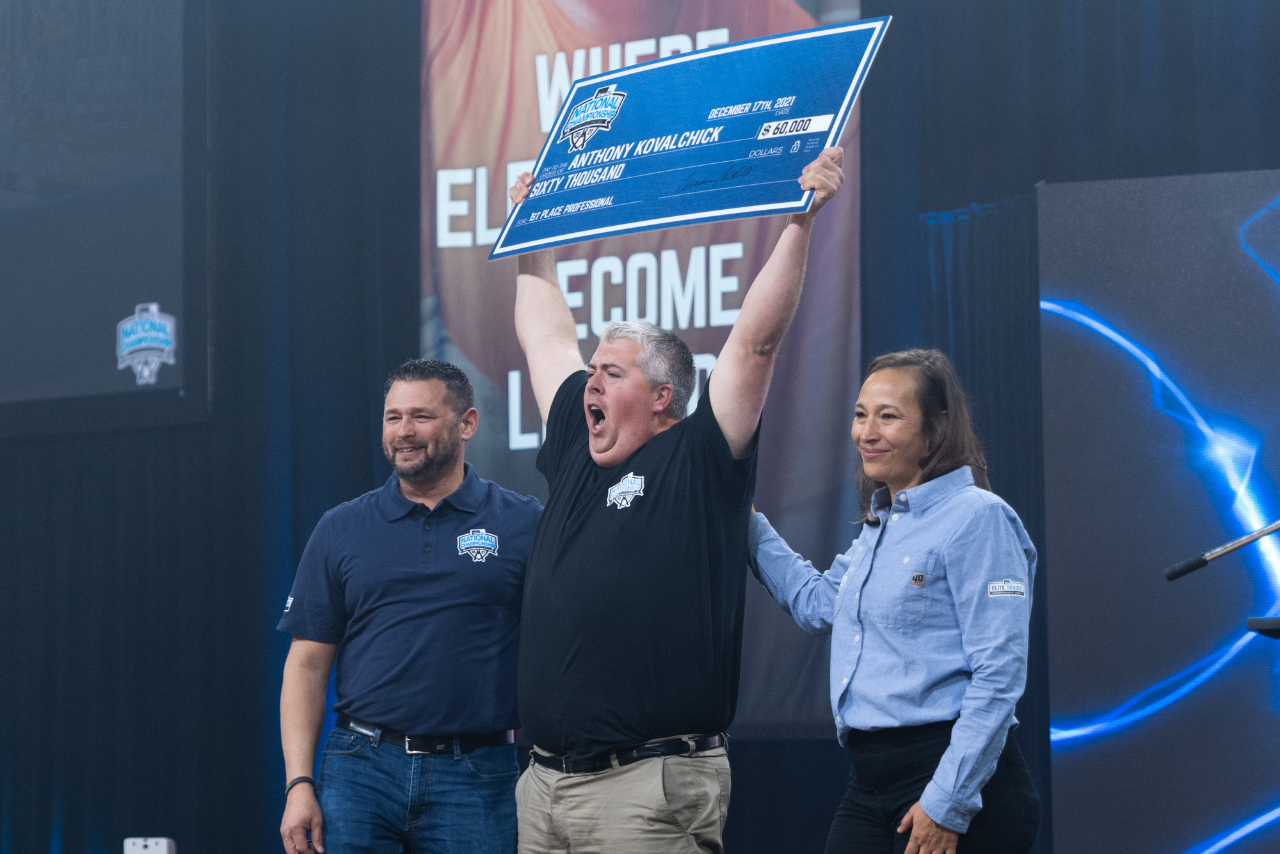 Electricians from across the nation competed for their share of over $600,000 in cash and prizes

SYCAMORE, Ill. - IDEAL® Electrical concluded its fifth annual IDEAL National Championship in Nashville on Friday, Dec. 17, marking the competition’s highly anticipated in-person return. Out of more than 32,000 electricians who competed in Qualifying Rounds across the U.S. and 142 final competitors, Anthony Kovalchick from Wilmington, N.C. was crowned champion, winning the grand prize of $60,000 while Michael Zurenda from Binghamton, N.Y. took the top spot in the student/apprentice competition, winning $40,000.

This year’s National Championship featured an exciting new addition, the Pro-Am team challenge, where one professional and one student/apprentice could compete together. Team “Risky Business,” consisting of team members Will Barnett and Christopher Brieschke from Elgin, Ill. won this year’s Pro-Am challenge and were awarded $40,000 and $5,000 in IDEALCash.

Throughout the 2021 IDEAL National Championship, competitors demonstrated their skills in four rounds of intense challenges, including a commercial pull box prep and install, a commercial panel install, a three-way switch install and an entire panel change-out. Family and friends of the participants filled the arena to watch the adrenaline-pumping events of the week and to cheer on the competitors.

For more information on the IDEAL National Championship, click here.

IDEAL® ELECTRICAL established the IDEAL National Championship in 2016 to highlight the professional trades as a rewarding, in-demand career path and showcase the skills of electricians that are vital to our country now more than ever. Congress recently passed Bipartisan Infrastructure Law (Infrastructure Investment and Jobs Act), a trillion-dollar deal to boost infrastructure across the U.S. at a time of a significant labor shortage.

Labor force participation remains below pre-pandemic levels with more than three million fewer Americans in the labor force today than before the onset of COVID-19 according to the National Council of Compensation Insurance (NCCI). The skilled trades are feeling the impact of this labor shortage with 68 percent of companies having struggled to hire skilled workers, according to the Angi 2021 Skilled Trades Report, with half of them (33 percent) stating that they could not find employees to fill open positions. The report also found that belief in the skilled labor shortage within those in the industry is also increasing with 77 percent of tradespeople viewing it as a problem in 2021, up 6 percent from 2020.

“We are in the wake of an increasing skilled labor shortage across the U.S. but it is more imperative than ever that we attract more men and women to the electrical industry to meet the swiftly increased rise in demand,” Carmen Cardillo, General Manager, IDEAL Electrical U.S. and Mexico, “The IDEAL National Championship is one of many initiatives designed by IDEAL to attract young talent to the skilled trades and the strong community that makes up the industry, and highlight just how hands-on, mentally-challenging and rewarding a career path it can be.”

This year, IDEAL partnered with electrical distributors, retailers like Lowe’s, trade schools, the Independent Electrical Contractors (IEC), the National Electrical Contractors Association (NECA), the International Brotherhood of Electrical Workers (IBEW) and others to host Qualifying Events across the United States. Over the course of the Qualifying Events, more than 32,004 electricians came out to compete in various on-site challenges for the chance to make it to the IDEAL National Championship Finals in Nashville.

Special Airing of the IDEAL National Championship Action Next Month

The 2021 IDEAL National Championship Finals event in Nashville can be reexperienced in early 2022, when FOX Sports 2 will air a special broadcast of the competition to celebrate and honor the hardworking men and women of the electrical trade community.

The 2021 IDEAL National Championship Finals Week was sponsored in part by Rivet Work Inc. – a resource that is revolutionizing the way the trade connects crews, jobs and skills. After recently securing an additional $2 million in seed funding a year after raising its initial $600,000 in a pre-seed round, Rivet Work is partnering with IDEALs electrical division, aiming to improve the way contractors, electricians, unions and trade schools deploy, manage and communicate around human resources.

IDEAL ELECTRICAL is a company of IDEAL INDUSTRIES, INC. IDEAL is a global leader in electrical tools and wire termination, as well as the development, manufacturing and marketing of enhanced energy management systems, products and technologies for professional electricians, design engineers and facilities executives.

IDEAL INDUSTRIES, INC. is a global, diversified family-owned business designing and manufacturing superior products for the electrical, lighting and infrastructure industries. The 105-year-old company was founded in 1916 on the premise of forging ideal relationships with customers, employees, partners and communities. The company has consistently grown and expanded under five generations of family ownership. For more information, visit www.idealindustries.com.

Rivet (Rivet Work Inc.) is revolutionizing the way the trade connects crews, jobs and skills. The Rivet team is inspired by America’s skilled trades and has decades of experience working alongside the trade in the electrical, automotive and IoT industries. Rivet is based in Detroit and founded in 2020. The founding team includes Ryan Meitl, Alison Accavitti, Andy Lawrence and Louis Gelinas. To see how Rivet modernizes the skilled trade scheduling and field work experience, visit www.rivet.work. For general inquiries, contact Rivet by phone at (313) 742-7429 or by email at hello@rivet.work.